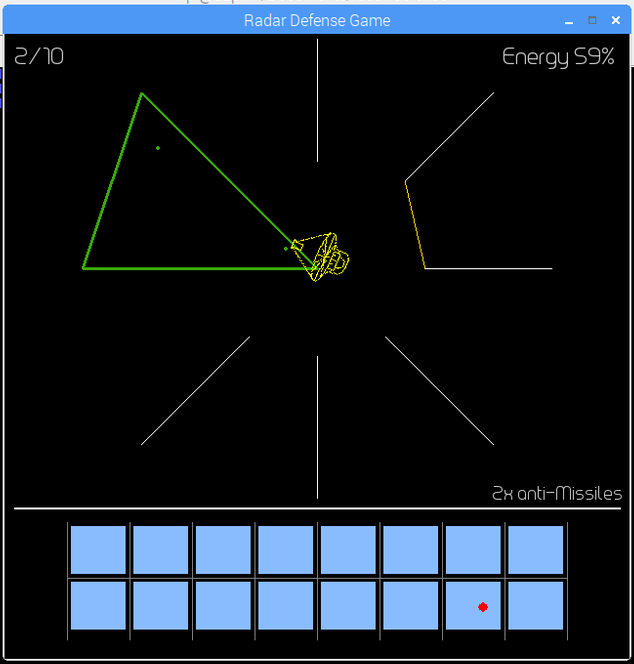 As my first (actual) post on my blog, I decided to write about a game I made this week, which I named Radar Defense.

About a week ago I had found a picture of a cool game that was programmed in python with pygame, a python library for making simple 2d games. What I thought was really cool about it was the guy had also built an external controller to control the on-screen game. When I saw it, I decided that I wanted to make something like that.

Since I just saw the picture and didn’t read about it, I didn’t know how that guy’s game actually worked. But I took inspiration from these kind of radio wave things in the picture of his game and decided to make some kind of defense game with a cool radar.

I started by making some very rough sketches of what I wanted the game to look like, and how I wanted it to work. I then started programming it.

Since I haven’t used pygame much before, It took a little while to settle on a game structure I liked, but eventually I settled on something like this:

After I settled on a structure, I wrote some classes, like the radar class, the shield class, an energy class - by this point, I had mostly decided how the game would work. These are the opening lines in the instructions built into my game

You are the director of a top secret base. Unfortunately, your power generator broke down today, and some enemies have taken the opportunity to come and attack you with missiles. Without power, you cannot operate your shields, and cannot block the missiles. Luckily, you have several backup supply batteries, but they will only last for so long. Your job is to survive long enough for your engineers to fix the power generator…

You could use your radar to scan the surrounding skies for missiles, but having it on all the time would use way to much energy. So the “energy” class manages the energy.

After I got to this point, I decided to start work on the controller. I had already decided to use an arduino to make it easy, but I had a problem. There aren’t enough pins on the arduino to manage all the buttons, switches, and knobs I was planning to integrate into my controller. I had some 74HC595 shift registers that I had ordered for a previous project, and I realized that I could use one of those to reduce the pins needed to operate a rotary switch from eight to four.

After solving that problem, I added a an eight-switch DIP micro-switch IC and two buttons, one to turn the radar on and one to activate a feature I’ll talk about later.

You can see the prototype controller here (I am planning to 3d print a case for it sometime in the future):

You can see the eight-switch DIP on the right.

I wrote and uploaded (using a fantastic command line arduino-compatible program called PlatformIO) some arduino code that would send an array that contained the state of every button, knob, and switch every 30 milliseconds to the python program.

After I had the controller working, I programmed the missiles. Getting these working took a little more work, as I had to find a line-intersects-circle algorithm to detect when a missile smashed into a shield. I also programmed some other classes, like a game-over class, game-start class, etc. Finally, I had a working, playable prototype - if a missile hits your base, it explodes and you lose, if the counter in the upper right corner reached ten, you win.

I then decided to add an “anti-missile” system. This would consist of several “cameras” at the bottom of your screen which would let you know if a missile got past your shields. If a missile got past, you would then press a button, and then press the button again when the camera the missile was seen in was highlighted. You would do this again with a crosshair on the camera - your goal would be to aim right at the missile, but you have to get the timing just right.

While writing this class, I had to calculate several cartesian distances to see if a missile was the right distance from the radar. This turned out to be super easy: You seperate the distances into the x and y axis, then use the Pythagorean theorom to calculate the hypotenuse:

I also had to calculate whether a point is within a circle, which obviously was as simple as using the above formula and checking to see if the distance between the point and the center of the circle was less than the radius of the circle.

Overall, I am happy with how the game (my first big pygame project) turned out - and it was really fun making it. Of course, the game still needs quite a bit of work, for example, better graphics (

) would be nice, but I’ll probably work on those sometime in the future.

If you would like to try out my game, go ahead! You can download the source code here, there are instructions in the README. If you like it, please star or fork it on github, and please leave any feedback or questions in the comment section below.